skip to main | skip to sidebar

Come play in my world for awhile!

The other night was an average night in the world according to me. The kids were in bed and I:

*Plopped onto the couch and kicked my feet up on the coffee table,
*Sipped my glass of wine,
*Noticed a baseball game on tv,
*Felt my eyelids begin to droop as I slipped into a semi-comatose state. Baseball has the magical abiliy to transform me from a chatty and energetic KathyB! into a catatonic lump in nothing flat.

It's a wonder Pat doesn't watch it more often.
***
I hadn't fully completed the transition to my zombie-state when something on the screen caught my eye. Grasping desperately to stay coherent I attempted to start a conversation.

KathyB! What a shame! What did the park used to be called?

Pat: What are you talking about?!

KathyB! You know... Like when they changed Candlestick Park to 3Com Park... I like the old, traditional park names much better. Besides who can even keep up with all the names. Didn't they change Candlestick to Monster Park...?

Pat: That was years ago, Kathy. It's still Candlestick. And what are you talking about?!?

KathyB!: (a tad of annoyance creeping into her voice) Chan Ho Park. What was the original name?

KathyB!: (thinks to herself) For cyin' out loud, this isn't rocket science. Follow along hubster.
Pat: (an equal amount of annoyance in his voice) What.... ?!

And then, he saw the light. His face burst into an ear-to-ear grin.
It would be fair to say he looked smug.
Pat: The pitcher is Chan Ho Park. They're playing at Yankee Stadium.
***
Final score of the 2009 World Series?
Pat: 1
Kathy: 0

I still have two of the four rescued kittens living on my back porch.
They're becoming more curious. 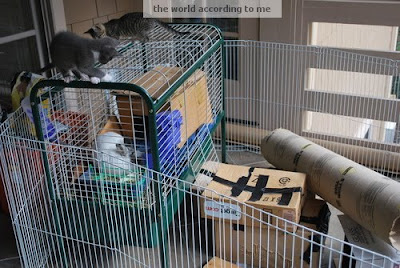 We've tried to keep the rabbit off-limits by separating her from the kittens with a fence.
It's not working. 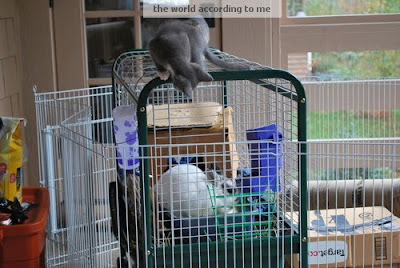 This isn't going to end well.
Anyone want to adopt some kittens??
Please??

The best part of Halloween this year

**Third Place**
KathyB!: Somebody needs to stay here and hand out the candy. Do you want to trick or treat with daddy or me?
Abby: Actually, mom, I think you both better come.

Abby: Because those candy bags get really heavy and slow us down. We'll need both of you to haul the bags if we wanna make good time.

**Second Place**
On the afternoon of Halloween we were getting ready to go to a party, then trick or treating, and then straight to an outdoor movie/bonfire at our neighbor's house. Adults were supposed to dress up, but I spent so much time making the kids over that I was running out of time to do my own costume: I was going to be leftovers. All I needed to do was wrap myself in tinfoil and put an expiration date on my front. I dispatched my dearest husband (hereforth known as Captain Smart Ass or CSA) to check on the tinfoil inventory:
KathyB! Just go check so I know what I have to work with...

(returning from the kitchen where he checked the half-full box of tinfoil. 250 square feet of tin foil)

CSA: I dunno Kathy. I don't think we've even got enough to get around your middle...


***First Place***
I know everyone's in kids-in-Halloween-costume overload right about now but, well, it's my blog :) 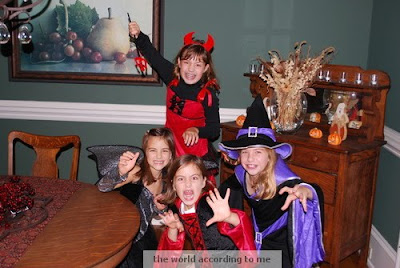 You know you want me

Kathy B!
I am a professional chauffer, referee, chef, accountant, and, of course, a live-in maid. But mostly, I'm Mom!